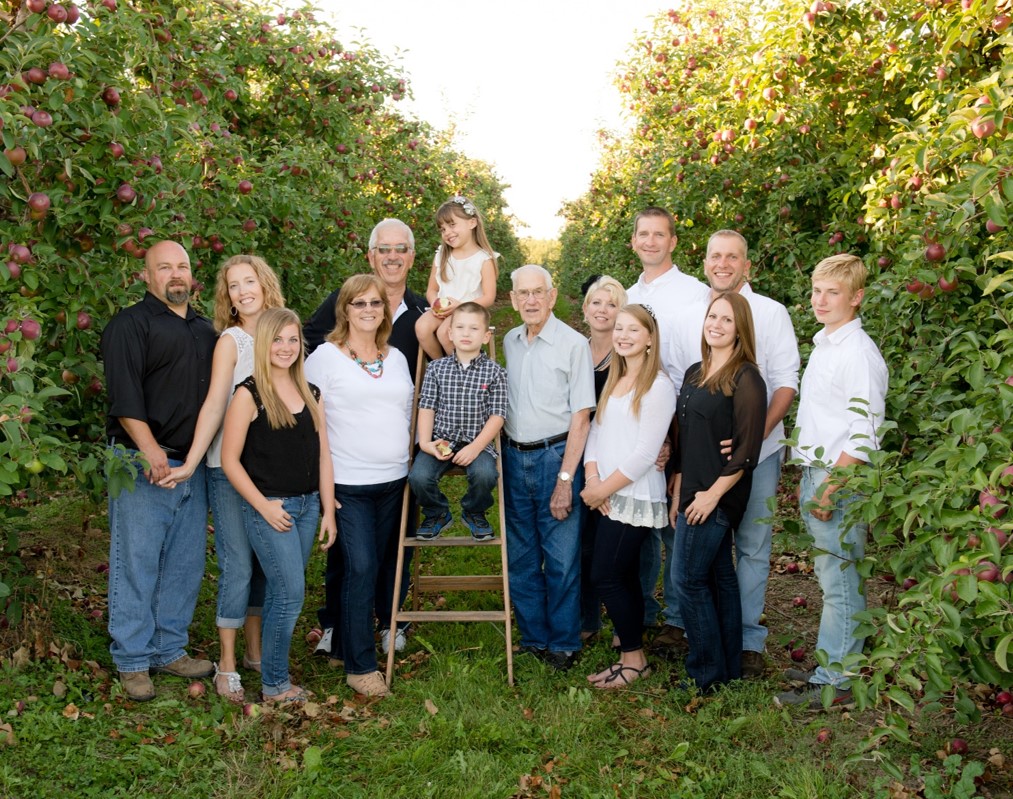 Adelbert Chapman was married in 1883 in Sweden, NY. Less than a year later, he moved his family thirteen miles west to the new farm, he purchased in the town of Gaines in Orleans County. Originally part of the Holland Land Company, Adelbert purchased the farm from members of the Rhodes family who established the farm in 1833. The property of the farm at the corner of Densmore Road and West Transit Church Road was situated in an ideal location. Located approximately seven miles south of Lake Ontario and about one mile south of Ridge Road, the area is perfect for growing a wide variety of crops. The proximity to the lake creates a microclimate beneficial for growing fruit and the variety of soil types allows for multiple vegetable and grain crops. The farm is also located less than two miles north of the Erie Canal, providing an excellent transportation route for produce to market and a source of supplies for the farm when originally purchased.

Like most early farms, the family maintained a variety of livestock and grew produce for themselves primarily, if there was surplus it was sold at market. Chickens, hogs, milking cows, sheep were all in residence. Apples, grapes, corn, cabbage, peas, green beans, tomatoes, hay, wheat, oats and sometimes barley were all grown in abundance on the original homestead. Apple orchards on the original farm purchase included varieties such as Greening, Baldwin and King (Charles or Permian). Portions of these orchards were replanted in the mid 1920’s and again in the late 40’s. Stanley recalls his father blasting out old stumps with Dynamite when he was very young.

When John T. Kast married Adelbert’s fourth daughter Ruth, in 1915, Adelbert built them a smaller house on the main farm approximately 100 yards from the big farmhouse. John & Ruth moved in there in 1916 and John and Adelbert began farming together. Tragedy struck the family in 1920 when Adelbert’s touring car was struck by the express trolley from Rochester and was killed along with three other members of his family (his daughter Fern and her two sons Harold and Ralph). John became the sole farmer on the Chapman farm at this time and he bought the farm from his mother in-law, Evelyn, in 1922. While all seven of John & Ruth’s children helped on the farm, only two stayed on the farm. Their oldest son Stanley and his younger brother Merwin worked together for over 60 years.

Stanley partnered with his father John T. in 1946 and progressively took on more ownership of the farm up until 1959 when he ultimately bought the entire farm from his father.

As Stanley took over the operation in the late 50’s and additionally as David became more involved, the farm began transitioning into a more commercial operation. Primary crops grown at this time were apples, sweet cherries, corn, green beans, tomatoes, cucumbers, wheat and cabbage. While livestock diminished during this period, a herd of sheep was maintained on the farm until the late 1970’s. David partnered with Stanley in 1966 to run the farm while Stanley’s wife Evelyn managed the books. Together they incorporated the farm in 1975.

In the early 80’s the push to increase acreage for fruit production began. Additional apple orchards were planted along with sour cherries. Processing vegetable acreage also increased at this time. Primary crops were once again apples, field & sweet corn, snap beans, and wheat. These crops became the staple for the farm for a number of years and continue to be so today. David and his wife Kathy took over full ownership of the farm in 1989. Kathy took on the office manager duties while David ran the farm operation. During this time, David also partnered with eight other local farm families to form Lake Ridge Fruit Company, LLC an apple packing and storage facility located in the town of Gaines in Orleans County. David served as president for over 20 years. Lake Ridge Fruit Company, LLC and its subsidiary, Lake Ontario Fruit, Inc. has since grown into one of the largest apple packing and storage operations in the Northeast.

John and Brett partnered with David and Kathy in 2015, both took different paths to the farm initially. Brett has been with the farm since 2001 and spent a year in Texas working on oil and natural gas rigs in 2007. He now serves in the role of Orchard Manager. NY 1 (SnapDragon), NY 2 (RubyFrost), Koru, Gala and Fuji have been the most recent additions to the orchards. John spent over 15 years working in the zoo field. He returned to the farm in May of 2013 after working at the Fort Worth Zoo in Fort Worth, TX for five years. He now serves in the role of Field Crop Manager. Since his return, the farm has expanded crops to include lima beans, soybeans and malting barley.

Kast Farms was awarded the Conservation Farmer of the Year award in 2009 and received The New York State Century Farm Award in 2016.