I think it is time we take a look at OVERTIME. We hear so much about what a great opportunity it can be for employees. Likewise, we hear almost every employer held in fear of what it will do to their profitability. So, as in most things, the truth lies somewhere in the middle.

In modern times, overtime became a tool during FDR. The nation was struggling to survive in a world depression. The bread lines were enormous. People were desperate to find any work. No one was demanding to receive overtime. So why would FDR impose overtime on employers who were struggling to survive. The President saw that he needed to somehow get more people to have a job. He felt that if he imposed time and half after 40 hours he would encourage employers to look to employ new faces to fill those hours at the initial pay rate. In short, he was not trying to giv

e employees a benefit for working longer. Rather he was trying to get new faces off the breadlines.

Today most all hourly workers have overtime in their portfolio. My question is, what does it really do for them but limit their ability to earn beyond 40 hours? I realize I grew up on a farm. We did not ever discuss our hours or overtime. I also recall being the sole provider for my young family. I was very grateful that I was not limited to 40 hours. It would have dramatically reduced my income potential. So my question for legislators that are concerned about helping the life of hourly employees, is overtime hurting or helping? Thinking outside of the box I could argue that legislators could make the case that they should increase the overtime cap from 40 to 50. This would make it much easier for those workers to support their families if they could simply remain on their primary job longer. To find a second job is very difficult and almost always for a lower hourly wage. I know this is not a current idea but I challenge people to find the flaw in what I am asking.

Agriculture is different. This is a subject that I feel needs to be discussed but on a national stage. My challenge is that before we attack the system in agriculture we take a long creative look at how we might make New York a much better place to work and raise a family. This move alone would encourage new growth in business and attract business to New York State. That would really be a refreshing change. 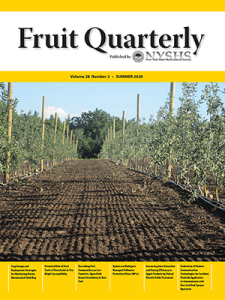 Brown marmorated stink bug (Halyomorpha halys, Stal) (BMSB) is an invasive species which causes economically significant damage to tree fruit, vegetable, ornamental and field crops. This pest was first discovered in the US in eastern Pennsylvania in the late 1990s but has subsequently spread to over 40 states including many where fruit production is widespread (citation for BMSB first detection (Hoebeke and Carter 2003)“StopBMSB.org” 2020). Initially, stink bugs were primarily a nuisance pest for homeowners who ombatted populations invading their homes each fall (Nielsen and Hamilton 2009). However, damage from
BMSB feeding was soon observed in commercial orchards and by the late 2000s, this pest was a growing concern for fruit growers in the Mid-Atlantic states. Currently, BMSB is considered a serious pest of tree fruit within the US, causing major damage to apples, pears and especially peaches (Holtz and Kamminga 2010).